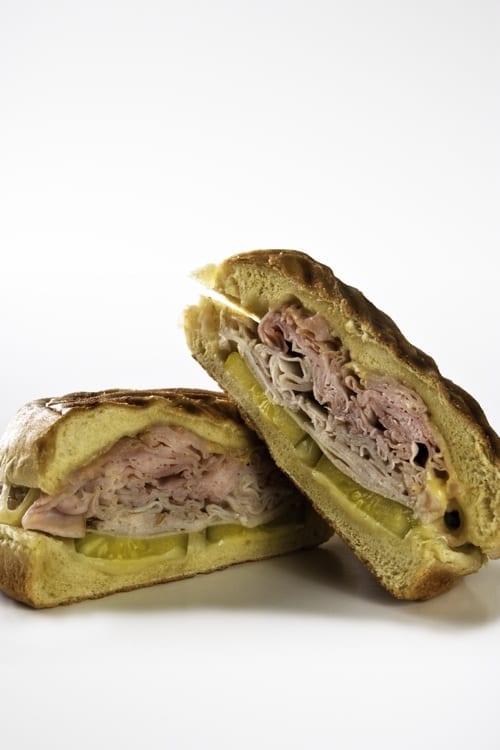 So here’s one of the images from the food photography shoot. And here’s the lighting setup: My main goal was to fill the image with as much soft light as possible. This setup is what I settled with later on. Main light behind the food, kind of low to rake across the sandwich and give it some texture. Even though that strobe is going through a baffle and the silk on the soft box, I added the extra diffusion to spread the light some more and even further soften it.

Later on I settled on using a small strobe through an umbrella as fill. Originally I created some fill cards (seen below the table) from some thick poster board scored down the center so it folds shut and forms a V. Had one on either side of the sandwich, leaving a gap for the lens. That worked pretty well, but the table was pretty small and it was hard keeping everything balanced. Plus it was nice to have some control to raise the fill light if needed.

The ‘seamless’ background was made from a few sheets of poster board taped to the table and clamped on a stand.

I had a pretty sweet tethered rig (first time I got it all set up) to the computer with a really awesome camera remote that I’ll write about separately.

As for photographing the food itself, let’s just say I’m sure food stylists are worth their weight in gold. There’s so many ridiculous and amazing ways to keep food looking great and to get cool effects (like a steamer for steam or spraying glue onto pancakes so they don’t get soggy from syrup) that someone who specializes in this would know. We went through a bunch of sandwiches and eventually figured ways to make things work and look good.

The biggest issue was sandwiches falling apart. Easy enough solution to just jab the back with a bunch of toothpicks.

I also found that food photography is all about the details. I would just get my fingers all in the sandwich and move pieces around until it looked its best.

All in all it was a fun day and I look forward to going back to the restaurant to see some large prints of the pictures.

If you’re ever in Vero Beach be sure to check them out and grab some yummy sandwiches at Grilligans.