The Visitor and Geoffrey Gilmore [4 of 5]

This is part four of a five part adventure that involves driving Geoffrey Gilmore (the Director of the Sundance Film Festival) around Tallahassee, Diet Cokes, private jets, The Visitor, tea, a 4 am flight, and of course, coffee. Part one and Part two, and Part three.

Friday felt a lot like Thursday. Geoffrey was going to screen the mystery film again, but this time for all the film students.

The movie was The Visitor, from Tom McCarthy, who also did The Station Agent. After The Station Agent, he got the usual studio offers to do films, but turned them down. When he decided to do The Visitor, he was adamant that the lead had to be Richard Jenkins. I thought he was a fairly known actor, mainly from watching him on Six Feet Under, but apparently not.

The original financiersÂ  were going to fund the film as long as the lead was someone more famous than Jenkins. McCarthy was adamant that it had to be him, and he lost the investors. Eventually it was funded by one of the founders of eBay. 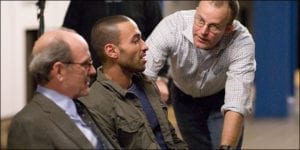 Like the casting in The Station Agent, Jenkins was great and perfect for the roll, and it touched on a lot of good issues (immigration, cultures, mid-life change). Afterward, questions were brought up about how to market this film. From the issues I mentioned, it covers a lot of topics and isn’t a straight ‘life changing story’ or ‘love story’ or ‘culture clash story.’

I feel like the trailer does a pretty good job of summing the film up, incorporating all the topics instead of just covering one and marketing it to different groups.

This is a crap year for independent films, and The Visitor will be one of the few indy films to get critical acclaim, be well received by audiences, and a decent box office.

Later that night, I drove Geoffrey and his entourage to the University President’s House for dinner. I went and got a Joey Bag of Donuts at Moe’s (I think I got the better deal, because the following day the Dean was sick with food poisoning).

It would have been neat to go inside the house, but apparently I didn’t miss much after it was noted that the interior design was kind of lacking ((After checking out that video I see what was meant. They have a library with no books.)).

This night there was no after party, and I was successfully able to drop Geoffrey off at his hotel for the evening.