Where the Wild Lensbabies Are

I remember when The Diving Bell and the Butterfly came out one teacher said, “the cinematography will make you jiz your pants.”

I always thought that would be a pretty sweet compliment to receive for an image you create, and Diving Bell was quite stunning (though after viewing my pants remained dry).

Fast forward to a few days ago, with me messing around with the EX1, and I wondered what it would look like if you put a Lensbaby on a video camera through a 35mm adapter. (Lensbabies are these cool little 35mm lenses that let you control the bellows, so you can get very selective focus and do all kinds of weird things, like make landscapes look like miniatures)

So I’m unpacking my ridicoulsy heavy box of magazines I refused to toss when I left Tallahassee, and I have an unopened American Cinematographer magazine from January of 2008 (it’s off their website now, but it’s the There Will Be Blood issue).

So in one of the smaller articles, it talks about the cinematography of Diving Bell and guess what – they used a Lensbaby to shoot practically the entire first third of the movie. Apparently Lensbaby makes a motion picture camera mountable lens for this type of work. So now I know what a Lensbaby on film looks like.

Kaminski and Diving Bell use it well, but I’ve been looking at some other footage and at times it can look really, really cool, while other times it looks like a cheesy 80s filter. 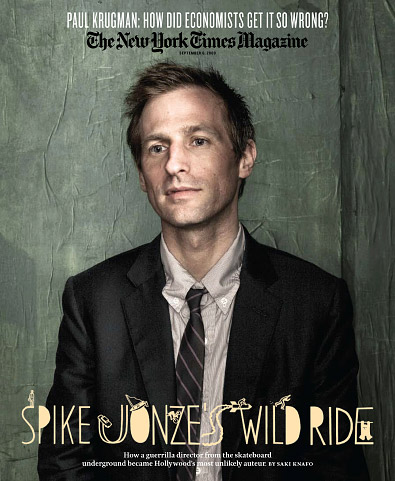 In other cool articles from around the web, the NY Times Magazine had a great feature article on Spike Jonze and his upcoming Where the Wild Things Are.

Like all NY Times articles, it goes beyond the film and is basically a biography of Spike Jonze, all his past work, and how he came to be doing a $100 million studio film. There’s also a lot of good stuff on the workings of Hollywood and how Jonze has been able to do what he wants while still being part of the Hollywood system.