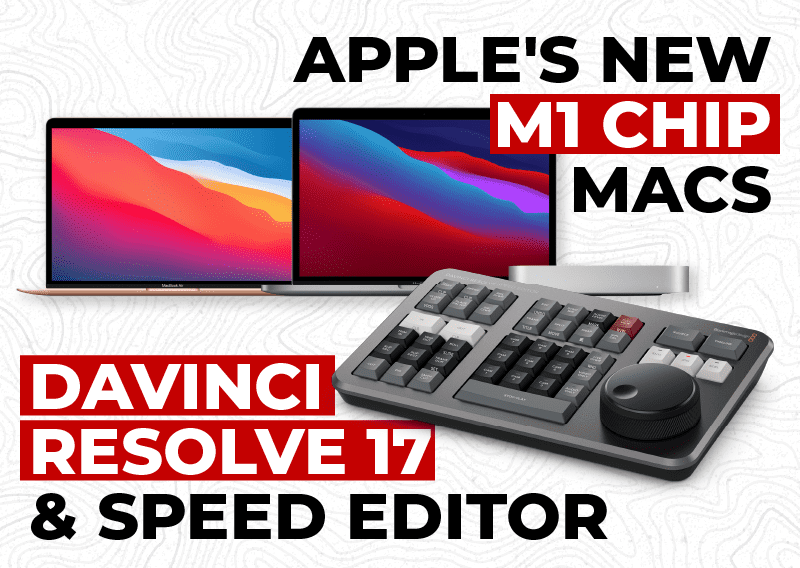 Last week had some expected yet still exciting from Apple with the announcement of their very first computers with their own Apple M1 chip. What’s this mean for non-techies? More speed, more power, more integration with iOS apps you know and love. Same price (or lower).

With Universal Apps, iPhone and iOS apps can easily work on an Apple chip computer. Just look at the announcement from super awesome editing app LumaFusion on taking their stellar iPad editing app to the computer.

In other big news, Blackmagic announced an update to their popular color correction and editing software, plus a bunch of new hardware including a Speed Editor. When people are looking to get into editing a bit more seriously without putting much money down I always mention Resolve because it’s 100% free and only keeps getting better.

Those were the two big headline stories in video world last week. But the two smaller tidbits that caught my eye were on a new daily mix feature from YouTube and a story on grocers (yes, the companies that sell you your food).

I’ll break down why I found it interesting below, along with some more interesting video gear.

Biggest headliner of the week but least surprising are the first Apple computers with Apple’s own M1 chip. It’ll take a few years to full shift from Intel to their own chips. The first computers they’ve announced are not their most souped-up models, so expect lots of power and speed updates once we start seeing M1 iMacs and Mac Pros.

But unless you’re doing heavy graphics work, they’ve said their lower end MacBook Air can handle editing 4K footage natively, which is impressive in itself.

There are over 300 updates in version 17. A lot of them have to do with Resolve’s color correction features (which is original use). Check out the full episode for the editing specific updates (mainly auto-reframing projects for social media and better audio syncing).

Of all the new hardware Blackmagic announced, this Speed Editor is the most interesting. It mimics the old-school shuttle wheel to navigate your footage. Blackmagic says you can use this device to replace your keyboard while editing. If you’re just starting out that could 100% be true and I’d love to get some feedback from people on how that goes. If you’re a longtime editor with lots of muscle memory on a regular keyboard then I’m even more curious how this device behaves.

The key to good video is nice, clean audio, and few devices can do that better than a lavalier clipped on to a speaker’s shirt. This Zoom device makes that super easy by being both a lavalier and audio recorder in one.

This isn’t a new creation, but the problem with the self contained device is you can’t monitor audio levels to lower the volume if your speaker suddenly starts talking louder. Well this updated Zoom F2 records in 32-bit float, which means it records such a huge range of audio data that it’s nearly impossible to distort from a loud talker.

Sony prepares to enter the drone game with Airpeak | TechCrunch

When I first saw this news I thought, “Really, another drone?”

The path to aerial domination is littered with failed attempts (3DR and GoPro’s Karma being some high profile ones). DJI rules the sky.

But as I thought more I realized Sony does have one advantage – they are by far superior sensor manufacturers. Their A7s cameras are known for being able to shoot in near darkness.

So maybe a drone from a sensor manufacturer is enough to break free.

This new YouTube feature is just for their music section, but I don’t think it’s a stretch to imagine this coming to videos sometime soon. An AI generated daily playlist of curated videos from high profile sources, like news channels, plus videos selected by YouTube’s algorithm for the user. That’s why it’s always important to make sure your video’s SEO is the best it can be. Check out this video I did breaking down my 9 step checklist on YouTube SEO.

To own or not to own delivery? Grocers reassess the Instacart dilemma. | Grocery Dive

So this story has absolutely nothing to do with video. But it is about audience and who owns your audience. Grocers are relying on Instacart and other apps for facilitating at-home orders, but who owns that customer data? The grocer or the app?

This is the same dilemma for businesses on any major platform. When you build out your business and rely heavily on a single platform (Amazon, Instagram, YouTube), you don’t own the direct connection with your audience/customers. You’ve always got to think of the what-ifs. What if they change the algorithm and ad revenue suddenly vanishes or my views plummet?

Email has proved itself to be nearly future-proof. So you’ve got to think about building other connections with your audience that you control 100%.