This is a precursor to a post I’m writing on how to figure out the true cost of a Kickstarter Project (using my recently posted project as an experiment).

I was curious to see what funding levels got the most response, so I’d know which area to put the most attention on and make it attractive to funders.

So I looked at about 30 successfully funded film projects on Kickstarter and noted how many backers they got for each level they offered ((This isn’t 100% accurate because if you multiply the number of backers for each level and add them up, lots of times the numbers wouldn’t work. I’m assuming this is because people donated a different amount, maybe a little more than a certain level, so they would still qualify for those rewards but not show up as a backer for that level. Or they donated and chose not to receive a reward.)).

This is the data graphed out. It’s kind of what I expected, but I think there’s a few little surprises.

This is by no means all encompassing, but I think it’s a pretty clearly defined pattern that you’ll find in most Kickstarter film projects.

Here’s the same data shown as a pie chart: 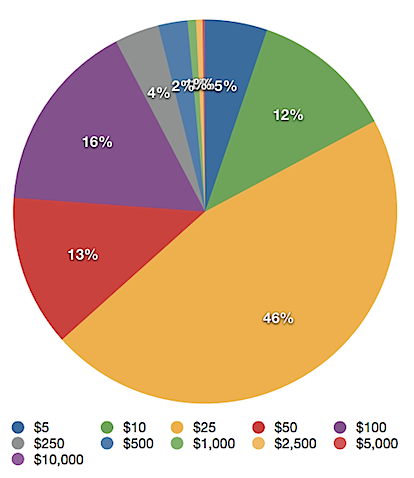 You can use this data to figure out how many backers you’ll need at each level to fund your project.

Clarification: A lot of this ties into the next post on true costs, because an estimated number of backers you’ll get for each level is handy to know to plan for how many rewards you’ll need to supply.

Stay tuned on how this comes in handy for figuring out the true cost of a Kickstarter project.

The Craft of Creating a GoPro Launch Video

Insight into the making of the emotionally charged GoPro launch videos.

Adobe Premiere 2015 just added a new feature to stitch together jump cuts. But is it as good as Avid’s Fluid Morph? I run a side by side comparison to find out.