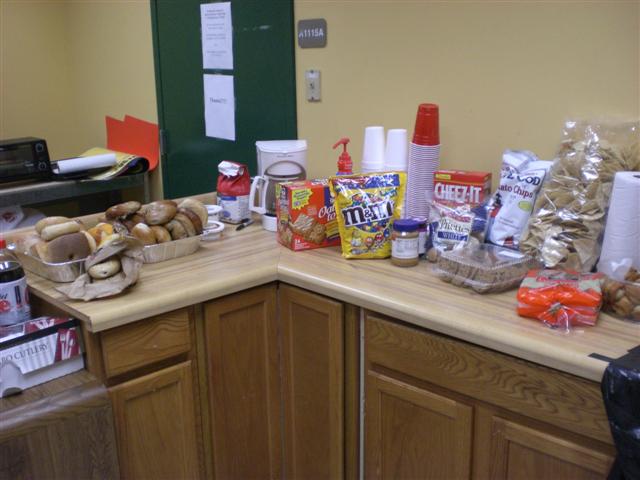 On set, one of the main responsibilities of the production team is craft services – the snacks and drinks for the crew to munch on when they have a break. Don’t underestimate the power of good craft services. In our case (and possibly your case) the crew is not getting paid, so the least we can do is give them good food. Most sets are judged on the quality of the craft services. A fed crew is a happy crew.

At every production meeting two sheets of paper go around – craft service requests and allergies/diet restrictions (for lunch). You can’t fill every request, but getting as much as you can makes the crew very happy.

A few days into set I heard one crew member saying how he always requests apple cider, but no one has ever gotten it. So the night before the last day of filming, I picked up a bottle during the craft service run. When I showed it to him the next day I got a big hug. He said it made his day.

Here’s a pretty general list that will cover all your bases and keep your crew happy:

It’s All in the Timing

We bought a lot of the food for craft services Wednesday night, but we only put some of it out the following day. The rest was stored in my car and slowly introduced, to mix things up day to day.

We knew day three and four would be outside in the heat, so we bought Popsicles but stored them until those days to be given out after lunch when the heat was at its worst. They were well received.

You’ll also need cups, plates, utensils, and paper towels. With every set I’ve been on there’s always a plastic cup issue, and I have yet to find a solution. People take a cup, have a sip, put it down somewhere, and then generally forget about it. Soon plastic cups are everywhere, so the Second AD grabs a bag and throws them all out, and then everyone gets a new cup. Not only is this wasteful, but a crew of 20 went through over 300 cups in six days (yes, we did have extras some days, but still).

We have sharpies on the table so people can mark their cup, but they still get thrown out. If you have a solution to this then please share. If not, then be warned that you will go through a lot of cups.

Bagels are probably the easiest thing to get donated. Especially from Bruegger’s. Most bagel places throw out what they don’t sell, so all you have to do is ask if you can stop by when they close and pick up what they’d normally throw away.

I called a bunch of other places to get donations but nothing really worked. Most chains require you to go through their corporate headquarters, so perhaps with enough time you might be able to get some food donated from Olive Garden or Chili’s.

Independent restaurants seemed to be less likely to give donations but easier to work out a discount. The best method is to give numbers. “I need to feed 20 people for $100. Can you help me?”

No surprise here, you need fuel for the crew – coffee. Having a machine on set is easiest, since you can make what you need when you need it. But if there’s no power or machine, a Starbucks Traveller is a good solution. Plus they give you all the cups and extras.