Driving with Geoffrey Gilmore [Part 3 of 5]

This is part three of a five part adventure that involves driving Geoffrey Gilmore (the Director of the Sundance Film Festival) around Tallahassee, Diet Cokes, private jets, The Visitor, tea, a 4 am flight, and of course, coffee. Part one and Part two.

Geoffrey, the Dean, Paul and I went to Urbane downtown to meet Steve McQueen (I know, awesome name), Director of Seven Days of Opening Nights, for lunch. Urbane is definitely for the politicians and not poor college kids, but they had the most amazing butternut squash ravioli.

As for the lunch conversation, I didn’t take much of an active roll. Everyone had already seen the mystery movie, so it was fun to try to piece together what it was. Richard Jenkins was mentioned, and how the director turned down financing because he had to have him as the lead. And everyone agreed that he was perfect for the roll. 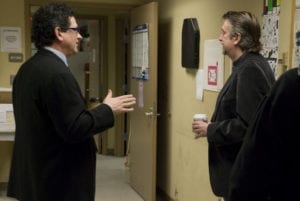 After lunch we took a tour of the Film School. The entire week leading up to the visit, the school went into clean-up mode with the carpets washed, walls painted, furniture fixed, posters displayed, and emails telling everyone to keep everything neat and organized. Walking into the school with Geoffrey, I’ve never seen it so nice. The Dean gave a tour of the school as I followed along and took a few pictures.

We then went over to Gadsden Studios. Gadsden is still a mysterious place to me. It used to be a studio where The Allman Brothers recorded ((Supposedly. They were formed in Jacksonville, which is about two and a half hours away, so it’s plausible.)). Somehow the Film School bought it, and my first year we used it for crew drills to practice filming. Some thesis films even shot there.

Then we stopped going there. There were rumors it was sold or condemned, but neither seemed to be true. Instead it’s being converted into the offices for Torchlight, another Film School venture. I’m still trying to grasp what exactly Torchlight will do ((Through numerous conversations with the Dean, I’ve gathered it’s a program to connect students with projects faculty and alumni are working on.)). Hopefully I’ll figure it out before I graduate, since I’m interning with it in the fall. 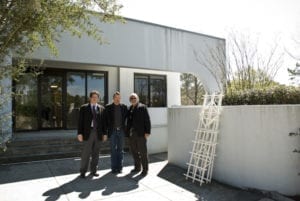 But the Dean wanted to show Geoffrey what they were planning, so this was the first time I had been back in more than a year. It looked about the same as I remember, besides some new carpet and cleaned up offices. It’s no surprise I have a thing for offices, and seeing these empty ones gave me a rush of potential.

After taking the entourage to a lunch meeting, I drove Geoffrey back to his hotel to get ready for the Seven Days event that night. After sneaking a peak at a rough cut of my F3 and grabbing three Diet Cokes for Geoffrey, I returned to the hotel.

This time it was just Geoffrey and I in the car, a scenario where I was wondering what would happen. What do we talk about? “So…you like movies?”

We talked a bit about the campus layout. I asked if he’d seen Helvetica. He hadn’t. We arrived at the theater, where I dropped him off.

I met up with some friends, had an overpriced on-campus dinner, then wasted some time again. I didn’t want to go home so they wouldn’t have to wait when ready, so I parked in a nearby lot, put the seat back, and took a nap.

Some time later in the middle of deep sleep, I got the call. They were ready. Since I was right around the corner, I didn’t have much time to mentally awake.

When I picked them up they were talking about going to an after party. Fortunately, the Dean saw I was not fully present and rescued me by offering to drive Geoffrey for the rest of the night. One of Paul’s signature Iced Venti Americanos probably would have done the trick, but I didn’t argue. Another day done.