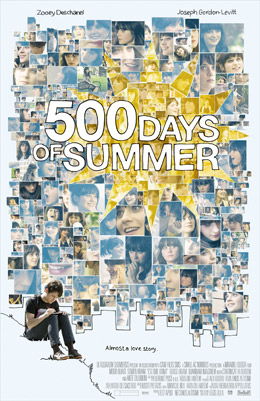 This past weekend Geoffrey Gilmore was back with a new film straight from Sundance – 500 Days of Summer, starring Zooey Deschanel and Joseph Gordon-Levitt and directed by Marc Webb.

I loved it. I thought it was the best love story I’ve seen since Eternal Sunshine, and emotionally very similar. Plus, it has a whole sequence in Ikea, so how could you not love it?

Plus the soundtrack is amazing, though sadly (but understandably) no Zooey music from She & Him.

Watched it? Good. Thought the narration was ridiculous? Good. That’s the point. Webb said it was meant to be over the top. Some people have even caught on that it was inspired by the trailer for Contempt.

How do I know Webb said this? Because he came by to do a private Q&A and discussion for the Film School, hosted by Gilmore.

The backstory of the film is great. The script had a pretty typical Hollywood beginning – all the studios passed on it until Fox Searchlight optioned it and Webb got a copy of it. He feel in love with it, but the studio wasn’t really doing much to get it made. He said even right now (as in now, where the film is all done) the film still isn’t greenlit.

So here’s the awesome part – Webb made it his mission to prove to the studio that they would be foolish not to make it. He spent three months and a lot of his own money to create storyboards, concept drawings, and a now famous scroll. The film is told out of sequence, and this scroll is an outline of the events in the script laid out on a timeline plotting their 500 day relationship in chronological order. Needless to say, the presentation blew everyone away.

Webb’s background is in music videos, with this being his first feature. People seem to frown when a music video director does a feature, but I thought his background made the film quirky and great. There’s an amazing split screen sequence in the film, but he knew how to make it work because he did it in a Maroon 5 video.

Also, he said the biggest asset to having a music video background is you know how to tell a story economically and make each shot count.

So the film is coming out in July, up against Harry Potter. It’s a good move since the audiences for these films are pretty different. But they have some challenges with marketing the film.

When they did a test screening it rated higher with guys. So how do you market a love movie to guys?

Also, as much as I love Zooey and Joey, when most people hear their names (like my mom), they reply with, “who?”

So a lot of the marketing will probably depend on good word of mouth, so I’ll start it here. The film is amazing, definitely the best thing I’ve seen this year. You will love it, you should see it, and bring your friends too.