In Russia, Subtitles Fork You!

With a tight budget I’m always a big fan of turning to Elance to outsource some work. I’ve had interviews transcribed with timecode reference, After Effects animation, and poster design done. Now I needed some subtitles for Bots High. I knew this would need a higher level of accuracy than I expect with transcripts, so I was willing to pay more than I do for transcription.

I got a bid from a Russian company. At first I was hesitant – I really wanted a native English speaker. But their emails had proper grammar and they said they had English speakers on staff. So I went with them.

You know how it goes, you get what you paid for. I knew I’d probably have to tweak some stuff, and I was expecting what I got back to be 90% towards a final product. It ended up being more like 50%.

The timecode with the subtitles didn’t match up to the dialogue (which I can’t fully blame them for, I think there was an issue on importing), subtitles with six or seven lines of dialogue on one card, and my favorite – some of the most bizarre transcription that leaves me wondering what the hell they think this movie is about. I know not all the dialogue is crystal clear, but if you’re a native English speaker doing this, where you excel over a computer is you can take context and infer what they’re saying.

I realized when working with foreign freelancers / virtual assistants you have to treat correspondence and outlines like a computer program. You need to state every parameter, think of how they could stray, and write out what you’d think would be obvious but probably isn’t. I can’t blame them for putting six lines of dialogue on one really long card because I never said “maximum of two lines per card.” I just assumed people doing subtitles knew that, but you know what happens when you do that.

Below are some screen shots of my favorite WTF captions. It made the two days of going through everything and fixing it tolerable. Enjoy! 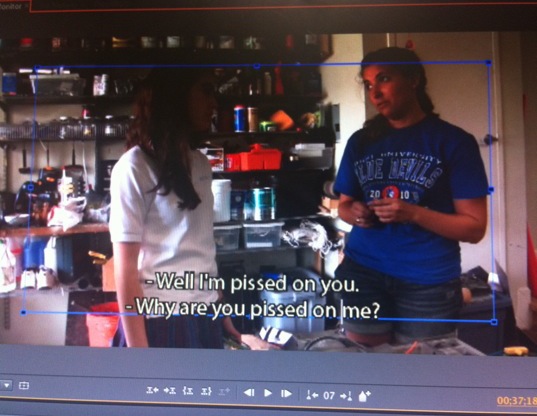 When girls fight there’s no knowing what they’ll do. 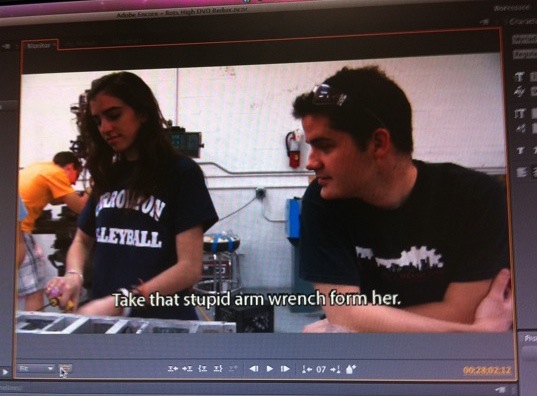 Sounds like she lost her arm in a vicious robot battle and got it replaced with a wrench – because she loves robots so much. How can you take her arm from (form) her?? Just reading this it’s probably not that funny, but that’s because it’s supposed to be, “How long is the shaft?” To which Will replies, “That’s a personal question.” As with anything you can still find some sexual innuendo in ‘hollowing your shaft.’ 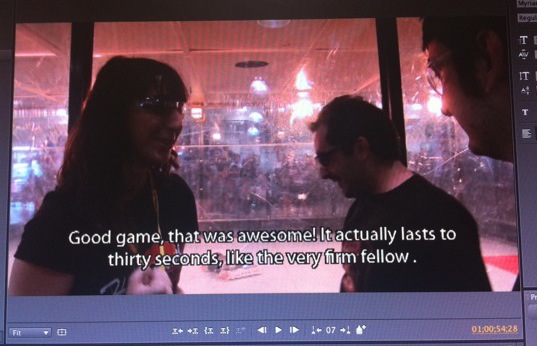 The best for last. They did understand that the robots were fighting, not having robo-sex in the arena, right? Line should be, “Good game, that was awesome! We actually lasted thirty seconds, so I’m proud.” I guess a guy’s firmness and proud-ness could be considered the same thing…in Russia!