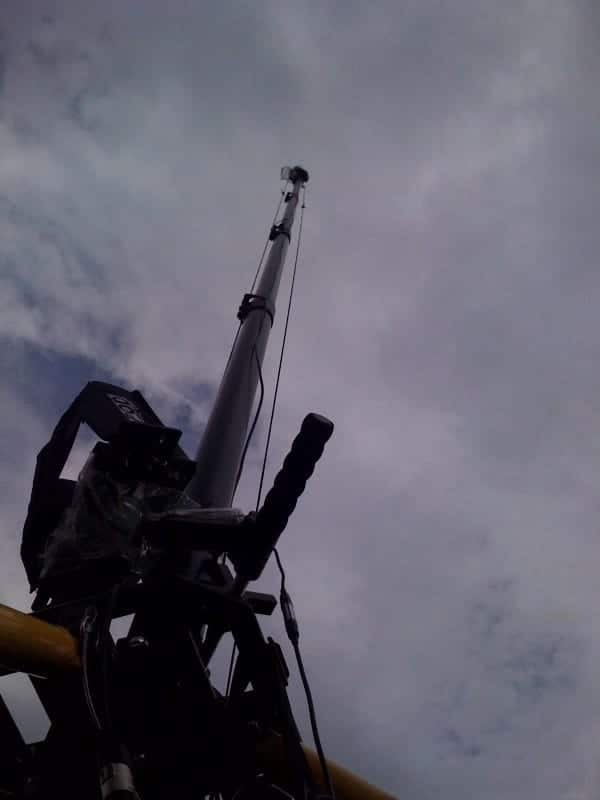 I’m in Sarasota right now, on what I believe is my first paying video job. It’s operating a HI-POD, basically a 30 foot pole with a camera on top, for filming a soccer tournament. I’ve seen more soccer matches in that past two days than I’ve seen in my life, and there’s still two more to go.

The weather hasn’t been too friendly. Friday we were shut down due to lightning (because, you know, with a 30 foot pole you kind of turn into a lightning rod), so we packed everything up, hung out under cover as the storm skated by without a drop falling on a field, and then went back out and resumed. About a half hour later I hear rain falling. I turn and see a wall of rain heading towards me, like something from a cartoon. It came, drenched us, then passed. Only in Florida.

In between the rain trying to make up its mind, I thought I was safe from the sun with the cloudy, moody weather.

Wrong. I got destroyed. I am so, so burnt. My shirt on Saturday was a little shorter than the one from Friday, so you could clearly see the line where I go from mild white to golden crispy. I lost count of all lame jokes I got, mainly from referees. However, the joke was on them when they came out to the field and one says, “Oh shoot, we forgot the balls.”

Plus the crazy, screaming coaches and fathers are bringing back suppressed memories from my embarrassing sports attempts in childhood. While the most they’ve done is yell at each other, filming a fight like this from an aerial view would mix things up a bit.

So while I’m here, baking and trying to get vegetarian lunches, a project from my documentary has gone viral. It’s a Typewriter program. Basically I came across an interesting quote from Will Self on how he liked the restrictions of a typewriter and the fear of knowing there was no going back – if you wanted to make a change you’d have to rewrite the whole thing.

So I had someone make a simple text editor that couldn’t delete or copy and paste.

Well, it only takes one mention from a big site to get things going, and that came from Lifehacker. It’s very exciting when something catches on and the idea of the program seems to have resonated with a lot of people, which is very cool.

And tonight I just saw I got a mention in The Guardian, however they wrongly attributed Will Self’s quote to me. While I do remember playing with my mom’s typewriter at work, I never used it for any real writing. Plus her’s actually had a backspace.

Next thing I’m hoping to go viral is an interview I did with Biz Stone, co-founder of Twitter. Here it is, please pass it on: