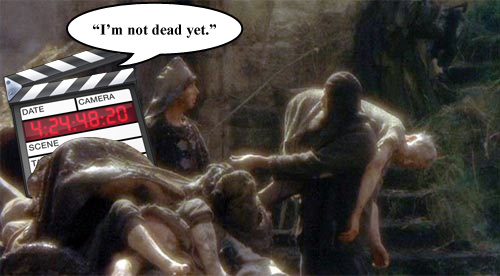 Never before has a piece of software put me in such an existential dilemma – the evolution (or de-evolution) of Final Cut Pro, the new software that’s so revolutionary it skipped two versions and went from 7 to 10. “Everything’s changed in post.” Yeah, people are switching systems, and it’s not to FCPX. I’m not going to go into what’s new in Final Cut or what it lacks, that’s been well documented (even Conan made fun of it). This is more my thoughts on non-linear editing, adapting, and how FCPX is a piece of crap that destroys work. But that comes later.

I started editing on Premiere in high school. It worked great for what I was doing and I was a big fan. First semester of film school we’re introduced to Avid (though knowing full well we’ll never touch it again). I still don’t understand Avid. It’s so rooted in linear film cutting. I found it really constrictive and counterintuitive to the whole point of editing on a computer. A completely separate mode just to make an edit? WTF?

This made me realize even film professionals are really hesitant to change, since Avid was the first NLE and had to convert film cutters to the digital world. I vowed never to be that person, I’ll embrace new technology!

The rest of film school was all Final Cut Pro 6/7. I became a FCP fan.

Then we edited Bots High. At first there was a lot of crashing and yelling at FCP, until we realized the bizarre hiccups, like bad idea to have a project file over 50 MB, don’t have more than 5 projects open, and tweaking playback settings. But that really introduced me to the idea of using project files not just for the film but to organize all sorts of media. No other program lets you have multiple projects open. With FCP, I have a project with my music library, project with stock footage, etc. For Bots High we organized footage into different projects. And then you can load footage from one project into a sequence in another. Fantastic!

I loved how lose it was, in that there were so many ways you could adapt it to work how you want it to. Plus, with Batch Lists and XML export to pull into FileMaker Pro, the amount of magic you can do is endless.

But did it need an update? For sure. I put 10 gigs of RAM in my computer and it was maybe using half of that. It could go faster, be more stable, use some UI updates, have better search. And even though FCP shifted more away from linear film editing than Avid, it still had a lot of carried over features, like bins and media organization. We all wanted a FCP8. But then we got FCPX.

I read about the uproar, I knew the complaints. But for most of my work I go straight to web, so a lot of the missing features weren’t a big deal to me. If I had a really large project in the works, then I’d probably use something else. But I wanted to try this new way of working, because I didn’t want to be that guy who’s resistant to new things and adapting.

So there’s a few things that are great in FCPX. I love that you can see all the media and scrub over it. Do you know how many times I’ve double-clicked, scrubbed through the footage, double-click, scrub….a lot. The precision editor is kind of nice too. And…it has a pretty icon. OK, I can’t find any more compliments. Not that I hate everything else, it’s just a mess. No tracks leaves a clusterfuck. Events? WTF, my project isn’t a birthday party. And no, I don’t want to import my royalty free music into iTunes so I can pull it in via FCPX. When listening to music on shuffle, I don’t want Cinematic Landscapes popping up. And FCPX starts throwing files in places I don’t know about. I don’t like that.

This isn’t just FCPX – Apple’s new direction overall is to eliminate saving. Not that you can’t save, but that everything you do is automatically saved. But let me tell you, I’m hard wired to constantly hit Command+S. It’s turned into a twitch. I’ve tried to do it when I’m using pen and paper (no joke). So when you try it in FCPX, you get the annoying Apple error sound.

So I’m trying FCPX out for a web video for Bots High. I’m pushing it to the limit, layering videos and using alpha channels. It was a bitch to align everything, because, you know, there’s no tracks, but it was working. This took half a day, and it was just about done. I was learning the workarounds, slightly warming up. Who knows how many times I tried to save and got the annoying sound. And then it crashed. Not unusual for FCP. But it’s always saving, right? Right??

Well guess what, it wasn’t. Some glitch happened, which was probably the same reason that undo wasn’t working, and it never saved, even though I kept trying to save. So all that work was lost. And that was the last time I ever opened FCPX.

I’ve tried to go back to Premiere, but it’s unbelievably slow. The hard drive is constantly spinning and it freaks me out. It took forever just to go through footage and make an assembly cut. Luckily there’s an escape hatch to go back to FCP7 with my cut. Looking back at the amount of work I just did, I couldn’t have met the client’s deadline at the speed Premiere was going. So cross that off the list.

And then there’s Avid. I don’t know. I know they’ve made it a bit more like Final Cut to get people like me. But it copies everything you import into it’s own MXF folder, which just means more hard drive space eaten up. And I feel like it’s forcing me into a style of working that I don’t like. But perhaps I just need to read more about it. Also because my friends in post-houses are saying everything is going the way of Avid.

So for now I’m still using and loving FCP7. Just today it was discovered that Apple is now selling Studio 3 again, but only over the phone, not online or in their stores. Does that mean they’ll still update and support it? Probably not. But we can hope.

It’s as if Apple spent the last 10 years developing Final Cut and making it a professional editing tool, just to build up its marketing cred so they can turn around, simplify it, and sell it to some hobby dad with a decent video camera (the same person who made DSLRs so popular) who can now show off his kid’s soccer game in a bearable manner and be like, “I cut this on Final Cut Pro. It’s what the pros use.” Just look at David Pogue’s review!

What will be interesting is when the new batch of high school filmmakers that used iMovie (and now, presumably, FCPX) enter film school and then the real world. Will we find a happy balance by then of a new way to edit that can hold up in a professional workflow? Can FCPX and FCP8 exist in the same world!?