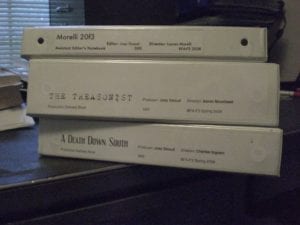 The storm has calmed. Last week really was the perfect storm, as my friend Justin and I described it ((I wanted to post the clip from The Office when Pam needs Michael to sign three forms that fall on the same day every few months, thus creating her perfect storm. Apparently this was not worthy enough for YouTube)). I had always heard stories of film schoolers getting loaded with a ton of work and scrambling to meet deadlines. I thought that was a myth. I was proven wrong.

As usual, a new draft of my thesis script was due.

And I sound mixed, the last step of my film. This meant finalizing the music, record some sound effects, and throw it all into the project before I went to the mixing room.

Then the delivery books for both of the films I produced were due. These are thick binders (as you can see above) that have all the releases, scripts, publicity material, backups, and any other paperwork relating to the production. It was a bit of a last minute scramble to find papers that were stored away for months.

And, for a little extra fun, Editor’s Notebooks were due for the film I edited. Plus some side projects like telling someone I can make a logo when I have no Illustrator experience and running two TV channels (I should probably write about that).

But this is all over now. F3s are done, thesis is nearly here and can finally get my full the majority of my attention ((As well as this blog, with some Full Frame reviews to come.)).