Working Smarter, Not Harder – My Documentary on Life Hacking

My final year in college I took on an additional project that wasn’t required. During college I got immersed in life hacks and GTD and productivity pr0n. I had always been about finding the most efficient way to do something, and I always had a lot of projects I wanted to do but would get sidetracked with procrastination. Thanks to the internet I realized I’m not alone – there were tons of blogs and books that wrote about this. Lifehacker.com, Getting Things Done, 4-Hour Work Week, etc.

So like many people I read the books, read the blogs on a daily basis, and toyed around with a lot of to-do lists app, calendars, and productivity systems. And it was a lot of fun. But eventually you realize you’re reading about productivity and doing things you think are productive, but they aren’t really.

You can also look at the rise in productivity blogs as a response to people looking for solutions in how to navigate work in the modern age. Emails, texts, Twitter, Facebook – we’re constantly getting pinged, which challenges us to find ways to handle all this information while performing complex and creative work.

These were ideas that really interested me and I wanted to explore further. So I went out to California to interview these writers on a variety of topics, ranging from creativity to the challenges of the modern worker. I was fortunate enough that some very busy people gave me a few hours of their time, from Tim Ferriss to David Allen.

What came out of this was a short documentary called You 2.0 along with 3 hours of extra interview clips that I know anyone like me would find extremely interesting. I’ll say that You 2.0 was not the film I had set out to make. My original ambitions were a feature film, possibly following a few modern workers who forgo their current ways and completely embrace everything in the various productivity books and blogs, to see how things work out. But that didn’t work out (however, it’s still an idea that’s still been on the back burner. Let me know if this is something you’d find interesting).

Interviewing the people in the film was an enlightening experience. It by far had the greatest effect on what I decided to do post college (remain independent and make movies). 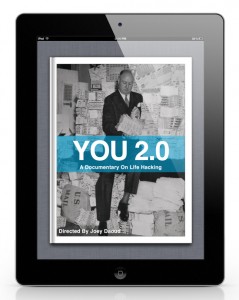 So I’ve had the film and interviews available online for about 2 years now. But now I’ve adapted it to some cool mediums. Here’s how you can get it:

I edited some of the transcripts from the interviews into an eBook, which you can get on the Kindle store. From Monday, October 8 to Thursday, October 11, you can download this for free. It’s also always free if you’re a Prime member on a Kindle. After Thursday it will only be $0.99.

This is my favorite format and it was a lot of fun to make, but obviously you need an iPad. This is a multimedia iBook. It contains the short film, plus a chapter for each person interviewed, featuring their extended interview clips and the edited transcript from the interview. You get the best of both worlds in a fancy iBook format.

Some interviewees just have an extended interview, and some just have edited transcript. But most have both.

This is everything as a DRM free MP4. Put it on your iPad, iPhone, computer. Listen to it in the car. Basically you can watch this whenever and wherever you want. Plus you get a PDF of the interviews.

Here’s the full list of everyone in the film:

To celebrate this launch week, I’m giving away 5 downloads of the iBook. Just tweet this post and I’ll randomly select 5 tweets. Make sure my handle @C47 is in the tweet so I can track it. Or just click here for the full tweet.

Learn How to Conduct Video & Podcast Interviews with Our Online Course

Conducting great interviews, ones that elicit insightful information and engaging stories, are key to any captivating documentary or podcast. Over on Skillshare we have a course on doing just that.

Everyone from Bots High that’s in BattleBots

BattleBots is back on TV! Many of the teams from Bots High are competing in the show.

Adobe Premiere 2015 just added a new feature to stitch together jump cuts. But is it as good as Avid’s Fluid Morph? I run a side by side comparison to find out.