This week’s Video Signal is a look at Facebook’s new push to promote their live shopping features. I see live eCommerce as something that is only going to get bigger. It’s huge in China. Tiny in the US. The field is wide open.

Other trends that stood out – a lot of virtual reality companies talking about the metaverse. And possible hardware from Apple to further accelerate virtual / augmented reality.

50 year old Japanese man discovers it’s far easier to build up an online following as a young woman, so he used a photo app to change his face to a young woman while posing with his motorcycles and built up a following on Twitter of more than 27k. /// Link

Predictions of what the next 3D / augmented reality releases from Apple will look like in the next few years based on a release of new patents. “A new VR/AR headset, that I call “the TV killer,” or “the HoloDeck” with many devices being planned for next decade from glasses to contact lenses. (Arrives in 2022, with glasses to follow sometime before 2025).” /// Link

Roblox blew up in popularity during the pandemic. A look at how it considers its future as a metaverse media company. /// Link

It's more fun to read this in your inboxThis is the online version of our weekly newsletter that over 1000 creators and marketers get each week. Sign-up to get it delivered straight to your inbox each week.

L’Oreal created a seven-episode web show on the cultural impact of hairdressing. “By developing “Run Le Hair Show” as a TV show, L’Oreal can deliver a mix of technical classes, interviews, tips, trend analysis and hair science tutorials in a multi-segment format familiar to most viewers.” /// Link

Two companies are battling for web comic supremacy to become the “comic version of YouTube.” /// Link

Spotify is introducing a podcast subscription service for $2.99 a month. /// Link

Five Guys opened its first ghost kitchen (kitchens that only cook for delivery apps). Not that interesting on the surface, but curious if they leverage the infrastructure to get in on the rise of influencer-branded virtual restaurants, like MrBeast Burger or Tyga Bites. /// Link

Creators building their own online courses have been taking off. Some creators are making millions While this article focuses on the phenomenal successes, I’m curious how many others courses are flops. /// Link

Chess master Garry Kasparov is capitalizing on the increased popularity of chess by launching his own online portal. Part instruction, part games, part community. Chess, btw, is one of the most streamed games on Twitch. /// Link

New device for augmented reality. ARKH, a wearable ring that can map your physical space in 3D and let your interact with virtual worlds, and control smart devices with gestures. /// Link

YouTube is adding some new updates, like uploading directly from Google Drive, reusing upload settings from previous videos, auto-generated titles and descriptions, and some sort of AI tool to help generate thumbnails. /// Link

How Google processes all the content uploaded to YouTube at scale so it’s viewable on any device at multiple resolutions. /// Link

Bunch of new features coming to Google Docs to make it more like Notion, like tagging users, getting rid of page view, and adding a timeline option. Notion is great but I can’t escape the universal use and convenience of Google Docs. I hope they add even more features. /// Link

Tips for using LumaFusion, the top video editing app on the iPad. /// Link

More plugins update to Apple M1 compatibility, including the ones from Digital Anarchy (see my review on their excellent flicker removal tool). /// Link

The new Canon R3 can shoot photos at a burst rate of 30 frames per second without needed to stop to buffer, which led a reviewer to see this as the perfect hybrid of still and video without needed to choose between one. Might be useful for short clips creatively you’re better off sticking with working in still or video mode (camera-wise and mentally). /// Link

I’ve been a Panasonic GH user since the GH2 (back when you had to hack them to enable video recording). They’re announcing a new model next month (GH6?). /// Link

TikTok added a green screen duet feature, where you can ‘seamlessly’ be in someone else’s video when using a green screen. Funny enough, this is exactly how they produced Jerry Springer’s courtroom reality show across three different states. /// Link

I keep talking about live shoppable video being the next thing. This article takes a look at the OG of live shopping: QVC. /// Link

TikTok is introducing shopping features to the app. /// Link

Office setup idea from Microsoft on the future of hybrid work. /// Link

VR is being used in tests to treat brain fog in COVID-19 patients. /// Link

Roomkey is a virtual world platform for events. It’s trying to mimic the serendipity of moving through a real space and meeting people. Target is groups smaller than 40 people. /// Link 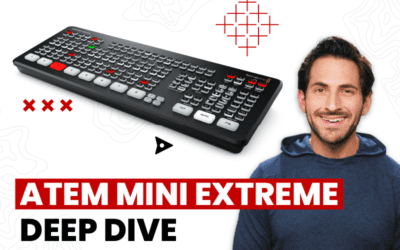