Finally saw Slumdog. Loved it, probably my favorite movie for 2008, even though I saw it this year. And I’m of course kicking myself for not seeing this in Toronto.

Paul saw it and said I looked like Jamal, the lead in the hot seat. My first reaction was, “There’s a movie about Who Wants to be a Millionaire?”

But I was sort of flattered that he thought I looked like him, even though after seeing the movie I think there’s zero truth in that statement.

However, there’s more truth in that I have been on Millionaire. At least the Disney version (which is now a Toy Story ride). Twice. In Disney World and Disneyland. Yes, I have some very fast fingers.

Here’s a snapshot my mom got before she got busted for taking pictures. 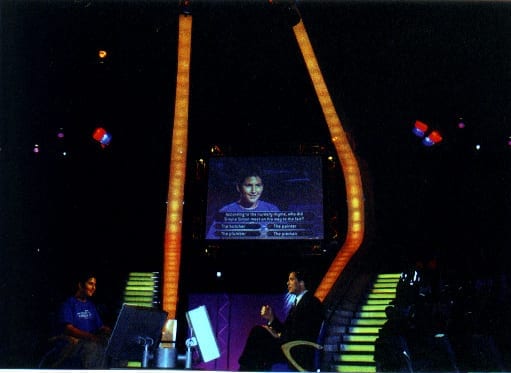 Unlike Slumdog, there was definitely some cheating going on in this version.

“Actually, I’m going to go with B, final answer.”

I was young, I could get away with it. Got all the way up to 32,000. Scored some pins, a hat and a shirt, which I guess are worth more now that the attraction is gone. Though doubling zero is still zero.

As for Slumdog, I was moved and blown away. Everything was great: the story, the style, the cinematography, the music. I’ve had the soundtrack playing on a loop for three days now.

I’ve been trying to find video and articles on the making of the film. Couldn’t come up with much, but bottom line is it was very guerrilla, go with the flow. They shot on location in the slums of Mumbai, hired local people to try to play crowd control a little bit, and used locals as extras. There’s some decent info in this CNN article.

The most interesting tidbit was how some of the crowd and chase scenes were shot with a Canon DSLR at 12 fps. The thought was people wouldn’t think of a still camera shooting video, so they wouldn’t stop and look.

At the very end, when “It is written…” shows up to answer how Jamal won, the person behind me says, “Of course it’s written, there’s a script.”

They then pulled out their iPhone and figured out how much 20 million rupees is worth. It’s something around $500k.