Filming a documentary in a robot workshop has its advantages, like a wide assortment of available tools and constant motivation to build something of your own. So I decided to take on the DIY dolly – the one with skateboard wheels on PVC pipe track – and join the club of all the other low budget filmmakers that have tackled this project.

One day and two cut fingers later, my dolly is done and works surprisingly well. I filmed a few robot battles with it today (in addition to getting some shots with a robot battle camera, which is a separate story). The plans I used were largely based on these sketches from a Videomaker magazine article. The project definitely cost more than the listed $39 (about double that, excluding all the wrong stuff I bought), but being that the sketch is dated 1996, there’s some inflation at play.

Here’s how mine came out: 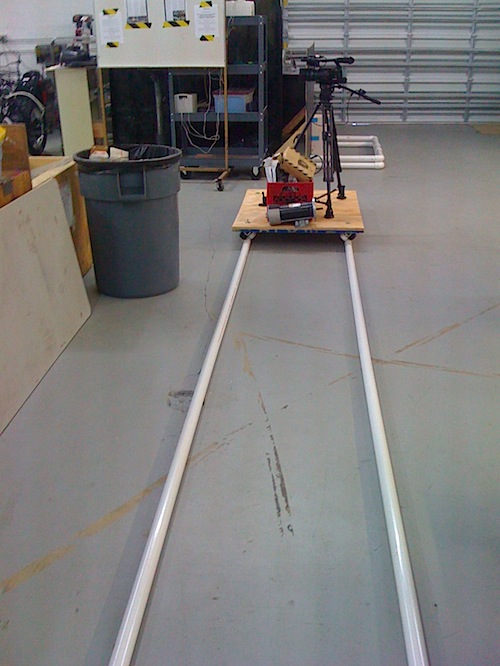 I plan to do a PDF of the instructions of what I did with a detailed parts list, since there’s a lot of guessing required in all the plans I found online. I’m also going to add a removable T handle on one end for easier pushing/pulling.

If you don’t want to wait for the PDF (which might be a good idea), here are some notes I have on the plan I linked to above.

I’ll post some video of the dolly in action when I get my main Mac back.

I call this an induction type project because once you see it’s doable, it definitely gets you thinking about other things you can build. The only problem I’ve come across with most plans online (mainly a jib, as that’d be the next thing I want to tackle) is their designed for small camcorders, not medium sized cameras.

I’ll see if I can rectify that.

Post Script – In trying to find the plans I used above, I came across a nice list of some DIY projects I hadn’t seen before on Film School Rigs and Mounts. Interesting projects include a car roof mount and Mini DV Underwater Housing.